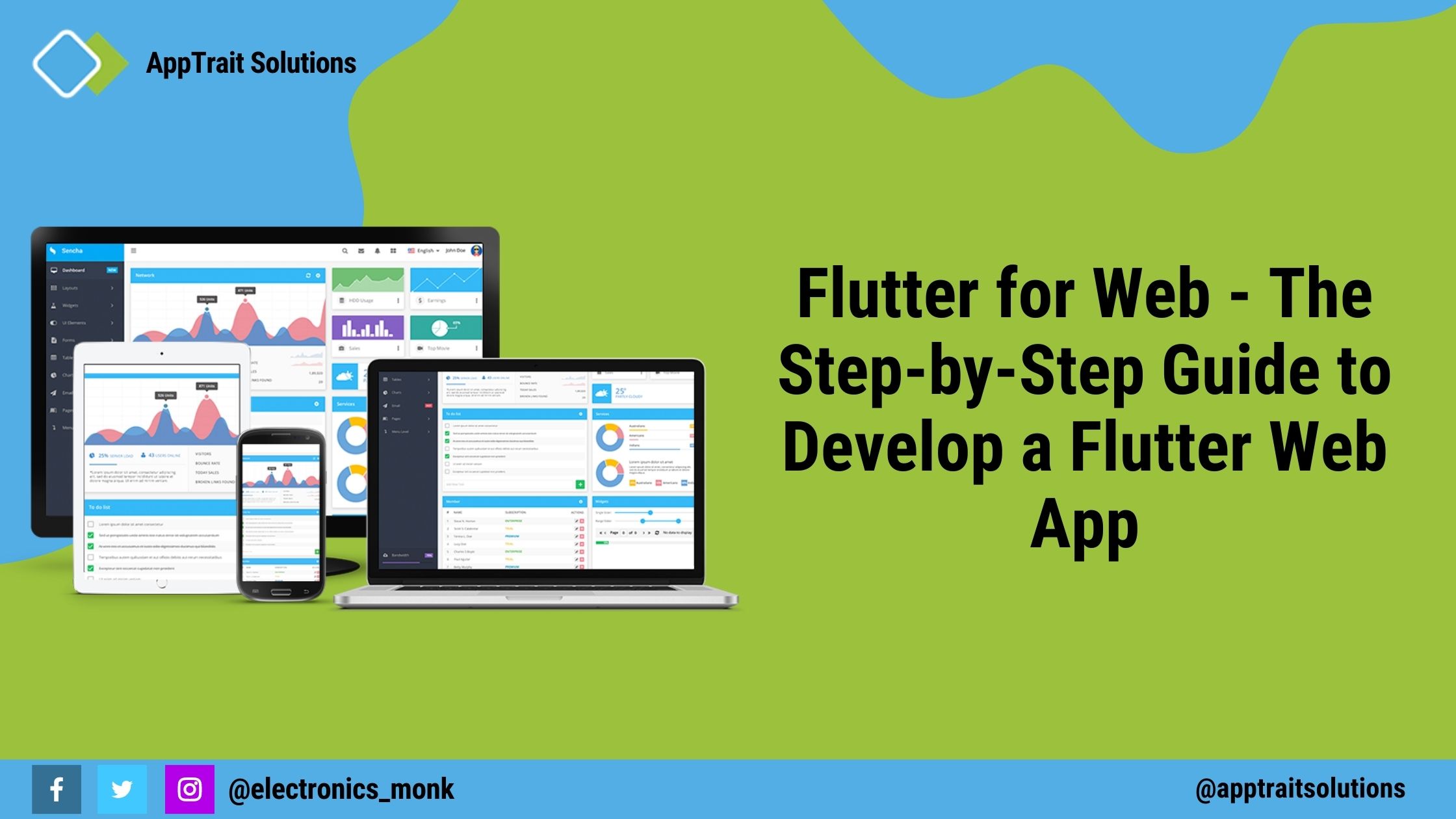 Flutter was initially developed to create cross-platform Android and iOS apps. However, it is no longer limited to mobile apps. Flutter now allows you to create desktop and web applications.

This is the appropriate guide for you if you want to try Flutter for Web. Let’s get started without further ado!

Flutter is a Google UI library that allows users to create native performant apps for desktop, web, and mobile devices using a single codebase. To build an attractive user experience, it uses Dart programming and mixes Cupertino and Material Design. The fascinating UI not only seems native, but it can also simulate the platform, allowing it to interact easily on any device.

What Is the Purpose of Flutter Web?

Flutter creates website apps in the same way as it creates mobile apps for iOS and Android. When you need to deploy a project, Flutter Web can convert it to native code. It creates single-page web apps. You can have several pages, but if Flutter converts a web app to the native language, the index.html HTML file will be the only one.

So, how do you make web apps with multiple pages? The Stack data structure is used by the Navigator. Despite the fact that Flutter Web is a single page, it may push multiple pages onto a single native page.

The Performance of Flutter for Web

The Flutter developer community is constantly improving and changing Flutter Web in an effort to get it to a stable release. Flutter Web’s performance is typically measured by two factors: it can render and handle large quantities of data in the first place, and it also has effects, transitions, and animations.

The rendering engines available to Flutter developers are as follows:

These engines create Dart code, which is then converted to CSS and HTML for widget execution. DomCanvas-based apps have a smaller payload than CanvasKit-based apps. CanvasKit’s performance is drastically improved by the extra massive size. As a result, deciding if you want your users to wait a bit for a better user experience will assist.

In a word, Flutter Web’s speed has to increase further to match that of recent JavaScript frameworks and libraries such as Vue, Angular, and ReactJS.

When Does Flutter for Web Development Offer Business Benefits?

When it comes to creating a web app, Flutter may be the answer. Learning when using the Flutter web for business is a good idea.

At the Same Time, Mobile and Web Development

If you want to create a web and mobile app at the same time, Flutter is the way to go. With Flutter, a full product can now be built from a single codebase by a team of Flutter developers.

Because online and mobile apps will operate on a variety of screen resolutions and sizes, developers must construct adaptable UIs. Flutter can handle platform checks when the online version of a screen has to be completely different from the mobile version. It aids in the rendering of various online and mobile interfaces.

It saves time since online and mobile apps share similar translations, styles, logic, and user interface components, among other things.

If you already have a mobile app and decide to use Flutter for Web development, you will gain commercial value. In this case, current UI components and logic may be used to construct web apps faster than other web platforms. The online version of your app does not need to provide all of the features that the mobile version does.

Flutter Web may also be used to support mobile apps. A demo app, your mobile app’s admin page, or a proof of concept, for example, uses standard code in concert with a larger Flutter system.

Should You Use Flutter Web If You Don’t Have Any Mobile Apps?

Flutter aids in the development of interesting and high-performing online applications. However, it isn’t suitable for static websites. It’s ideal for one-page interactive apps with a lot of UI components and animations.

A higher-quality website creation method may result in better outputs, faster load times, and more reasonable upkeep for static website pages with a lot of content.

Here are some of the benefits of using Flutter for Web in your business:

The drawback of Flutter Web

Due to the fact that it is still under development, Flutter Web has a few flaws. Take a look at this:

How Can You Use Flutter Web to Run Your Current Project?

Flutter Web is now on a stable channel since Flutter 2.0. If you don’t have Flutter 2.0 installed, you may still use it by performing the commands listed below:

Also, if you’re using Flutter 2.0 but haven’t used your prior app on the web before, perform the following commands:

You can use Flutter Web to launch your project once you’ve successfully implemented these instructions. A web folder may be found in the project directory. Choose Edge or Chrome and click Run to run that app on the Flutter Web.

How Do You Develop Your First Flutter Web App?

You don’t need any prior knowledge of Dart or other internet programming languages to create a Flutter app. The official Flutter Web documentation will walk you through the fundamentals. Here’s a step-by-step guide to help you construct your first Flutter Web app:

Make sure you have Flutter version 1.5.4 or above before starting your first Flutter Web app project. Install Dart 2.3 as well for app development. The commands listed below can be typed in:

Type the following on your command line to ensure that you are updating the proper version:

It will show the current state of the installation. Run the command below to obtain the Flutter Web development tools.:

Make sure the $HOME/.pub-cache/bin directory is included in the path now. It makes it easier to utilize the webdev command directly from the terminal. For macOS, type the instructions listed below:

Next, restart your system.

Select an IDE for creating a Flutter web app now. Here are the alternatives for you to choose from:

Different methods are used by these IDEs. You can choose your chosen one based on your appropriateness. VS Code is a web development tool that developers may utilize. To access the command palette, open VS Code and press ctrl + shift + p. Type “command” into the command palette when it has been opened:

You may create a basic project demo by giving your project a name and a location.

The pubget command will go through your project automatically, loading all of the necessary packages.

Visual Studio Code will now ask for permission to install webdev automatically. You may still manually install it by entering this command:

To execute your project, type webdev serve in the command line. Then, in the compatible Chrome window, you’ll be able to access your first example project.

What Should You Think About When Using Flutter for Web?

Here are some important things to keep in mind when using Flutter Web.

Flutter has been shown to add greater commercial value due to its growing popularity and adoption of business apps. You now have even more reasons to choose Flutter Web development after reading this article.

Flutter developers at AppTrait Solutions are passionate, dedicated, and skilled in creating responsive apps with Flutter. If you need expert Flutter Web development services to finish a current project, get in touch with us right away!

How to Develop a Chatbot App?